The point of buying my new camera was to expand my storytelling to include photos.  While I’m still learning the tricks of the trade with the Canon Rebel T6i, let’s start with the stories behind my rings.

I don’t know if you’re like me, but I love hearing the stories behind people’s jewelry.  I find that if people wear a certain piece of jewelry on a daily basis, it typically comes with some sort of personal story/heirloom/special gift type of story to back it up.  So this is the story of my rings . . .

These are the four rings I can most often be found wearing. 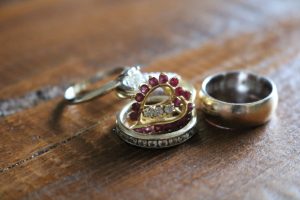 Ring #1:  my engagement ring.  Chris gave it to me on December 15, 2007 — which was the two year anniversary of the day we met.  While it was no mystery that I wanted to marry Chris and we talked about it (or, I should say “I talked about it”) quite a bit, we never discussed the types of rings I liked.  We didn’t go ring shopping together.  I just always kind of thought that if he did propose, he’d just pick out something on his own.  I also knew his tendency for the traditional and simple style of most things, so when he presented me with this ring it just seemed like him, which made me love it even more.  I know people tend to upgrade rings after they are married so many years or find themselves better off than they were when they got engaged — I’ll never change this ring.  It reminds me of the 25-year old version of us, and for that it will forever keep me grounded.  Right after Chris proposed and gave me the ring, he went and got another box which had my wedding band in it too (read next photo to see what happened to that ring). 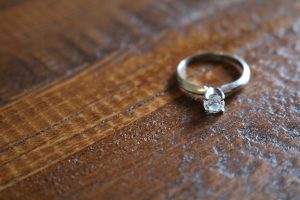 Ring #2:  my wedding band.  I started wearing it on September 13, 2008.  Now, if you read the blurb above about my engagement ring, you’re assuming this is the wedding band Chris had in the box.  Nope.  Let’s just say it looks like the wedding band he had picked out for me.  When he proposed he gave me the wedding band he had already picked out, I assume he bought them as a set.  A couple months out from our wedding I took it to a jewelry store in Columbus (he had purchased the rings in Dayton) to have it sized.  The store shipped their jewelry out to someone else who does the work and then sends it back.  When the box of jewelry that needed work/resizing, etc. was en route back to the store, someone opened the box and stole all the jewelry.  I always wonder where my original wedding band is at this very moment.  Did someone use it?  Is their marriage cursed?  Did a Pastor bless that stolen ring?  In any case, the store gave me a credit equal to the value of the stolen ring and I went to the store and picked out the one closest to the ring Chris had bought.  I do remember the diamonds and band on the original ring were a little more squared than rounded, and if I think about it too long it makes me sad someone stole it — but this one has served me well. 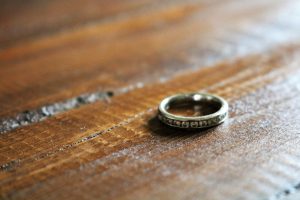 Ring #3:  my right-hand ring.  This ring has been passed down in my family.  It used to be gold.  It started as my Grandma Linda’s wedding ring and was later my Mom’s wedding ring.  My mom eventually gave it to me and I had it dipped in white gold and decided to wear it on my right-hand.  What makes this ring so special, besides having it passed down from my Grandma to my Mom and my Mom to me, is that I had all of our maiden names engraved on the inside . . . 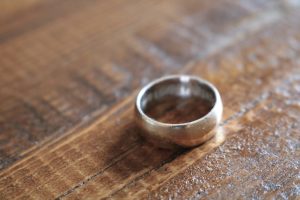 The first name says “Lovely” which is my Grandma’s maiden name . . . 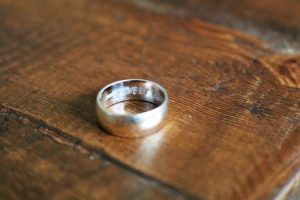 The second name says “Ginter” which is my Mom’s maiden name . . . 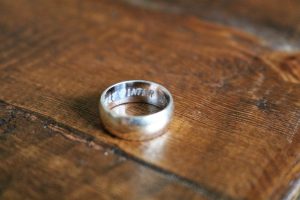 The third name says “Ignet” which is my maiden name (also, still my first last name).  The ring has enough blank space for one more name, “Hocker,” should we ever have a daughter. 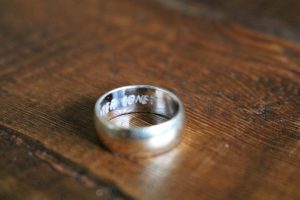 Ring #4:  my February ring.  When my parents and I were young (they were teenagers, I was two-ish) we lived in New York City.  My parents bought this ring in NYC for my Grandma Dona for her birthday.  One thing I love about my Grandma Dona is she’s never afraid — actually, encourages — gaudy jewelry!  I wouldn’t describe this as gaudy per se, but it’s definitely more ornate than my other rings.  She held onto this forever and she gave it to me when I graduated from college.  I swap out my right-hand ring for this one for the month of February, because not only is it a red heart, but my Grandma Dona and I share a love of Valentine’s Day.  It makes me happy to wear it the month of a holiday that is centered around love and chocolate — which makes me think of my Grandma Dona. 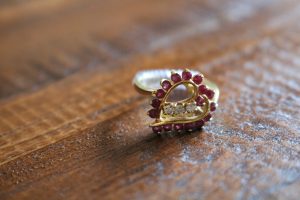 At night, my rings live in this little ceramic bowl that I got at one of my favorite places in my hometown, The Hotel Gallery. 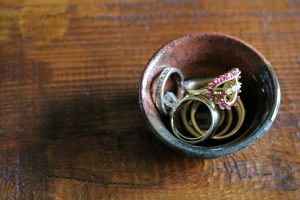 My ring collection expands beyond these four rings . . . but on a daily basis, these are the stories you can find me wearing.

I have to give Chris photo credit — he took the photos of the engravings on the inside of my right-hand ring.  I think he secretly loves my new camera as much as I do.