When I upgraded my phone, I decided to just let it fly.  I decided to just do my normal behaviors . . . . you know, “just to see how much I’m using my phone.  It’s probably not that bad.  I consume a lot of motivational and productive types of things.”

The story I was telling myself is that I was not addicted to my phone and when I am on it — it’s dedicated to “productive time.”  I don’t text with friends and family during work hours other than maybe 1 or 2 texts here or there, so I’m obviously winning at productivity, right?  I also spend a fair amount of time on my work email on my phone, so, another one in the justification bucket.  I’m productive.  I work hard.  But social media, yup.

I think the conclusion I’ve come to is that I don’t really spend much time scrolling through Facebook and Instagram, but what gets me are two things:

1).  I watch a lot of videos.  I justify them because they are motivational in nature.  I spend a minimum of 30 minutes a day watching livestreams on how to achieve your dreams, go for your goals, etc.  And when done, I tell myself I’m bettering myself.  But I probably have personal development fatigue at this point.  When am I acting on what I’m consuming?

2). When I have more than 2 minutes, I pick my phone up and open a social media app just habitually.  While my time on the app may only be a few minutes, I never actually allow my brain any downtime to think about . . . well, anything, really.  And then I wonder why I can’t come up with creative ideas for my second book?!

So I’m not starting a social media hater campaign — I love connecting with friends and sharing the latest things going on my life.  But, like all good things, I do think we need some sort of boundary or rule for ourselves before we’re 4.5 hours in per day on watching motivational videos that we can’t actually act on because we’re too busy consuming the videos themselves.

I’m going to share with you the step-by-step guide on how to set your own limits.  I am currently experimenting with setting my limits to 1 hour per day for all social media apps, which means I can spend 1 hour per day on Facebook, Instagram, LinkedIn (and a few other apps that they consider “social media” that I don’t really use) combined.  I can tell you after one evening of having the limit set, it’s like my brain has freed up thoughts and creative ideas about just whatever that I didn’t even know where backlogged in there.

Step 1:  Go into your Settings app and scroll down until you see the line that says “Screen Time” with a purple hour glass next to it. 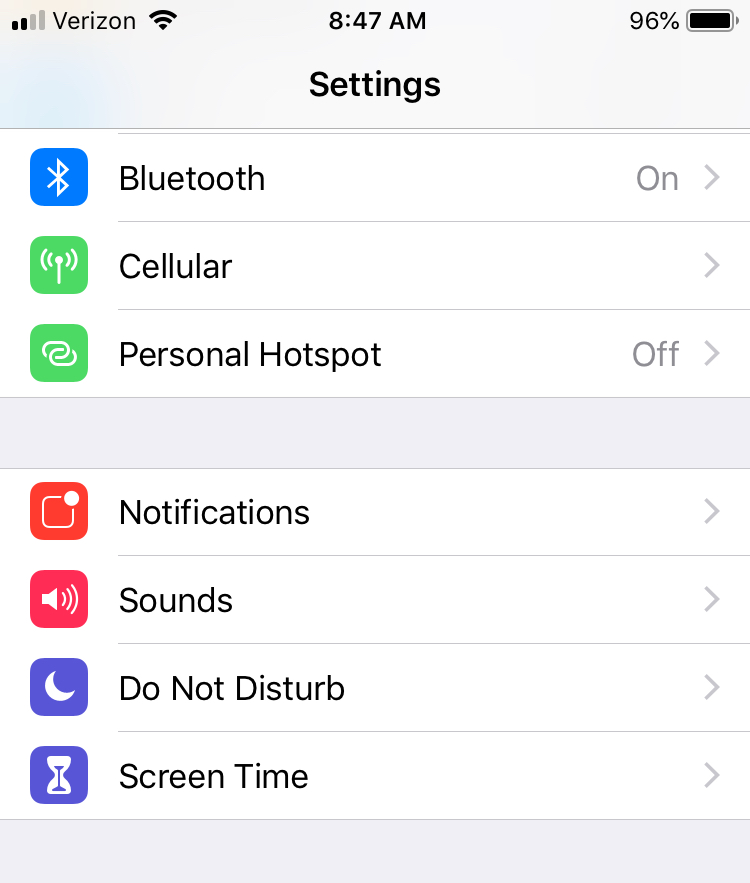 Step 2:  Once you click on “Screen Time” as shown in the image above, you’ll see the image below.  It will tell you how many minutes you’ve been on your phone today broken down per category (e.g. social media, productivity, other).  If you were to click on that bar chart, it will take you to a screen that shows you how many minutes per app you’re spending.  But if you’re looking to set a limit, just click on “App Limits” with the yellow hour glass next to it. 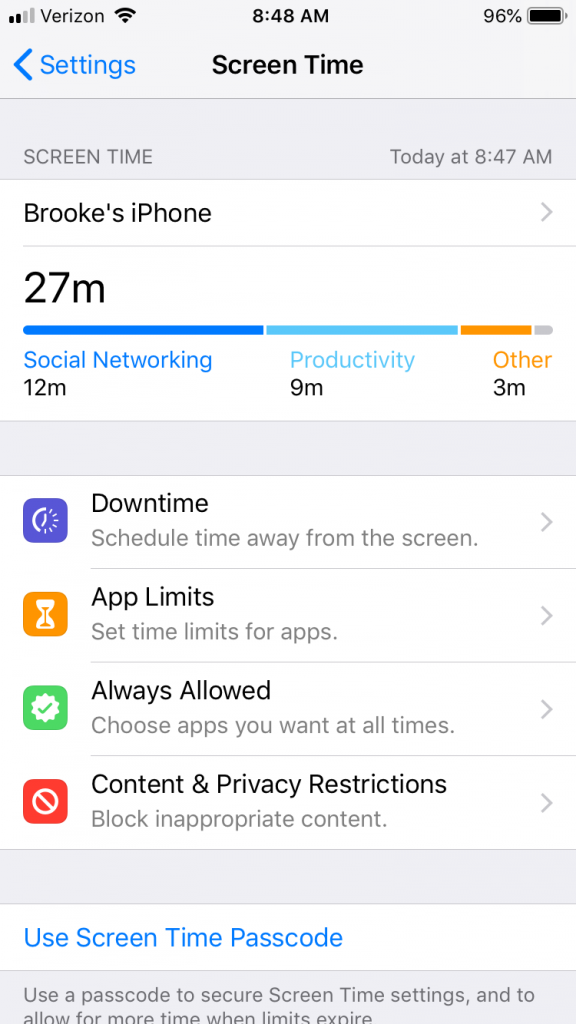 Step 3:  Once you’ve hit “App Limits” as shown above, you’ll land on the screen shown below that has the “Add Limit” option in blue font.  You can see I’ve already set a 1 hour limit on social networking, but if you’re just getting things set up you will only see the “Add Limit” option.  Click that button to change your life. 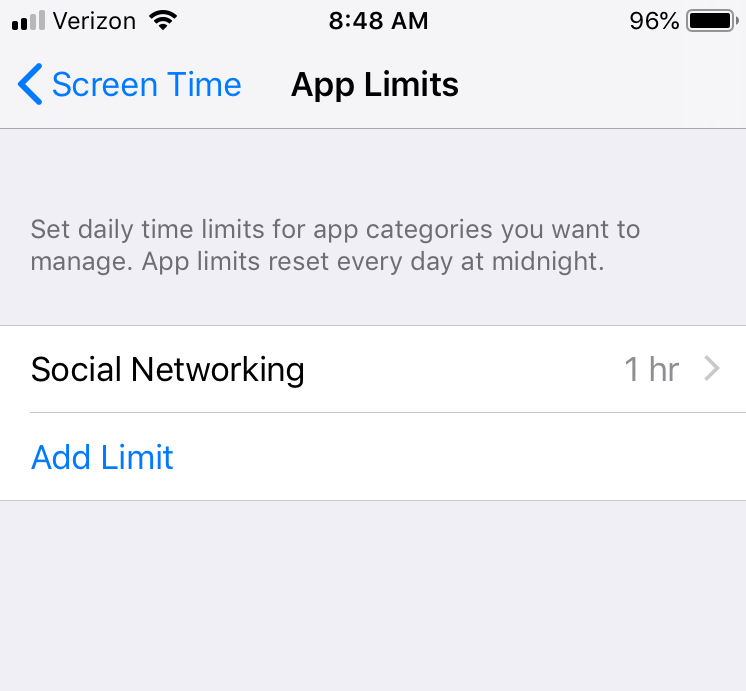 Step 4:  Once you’ve hit “Add Limit” as shown above, you’ll come to this screen where you can select which category you want to set your limits on.  If you choose “Social Networking” you will then hit “Add” and will be prompted to set a time limit. 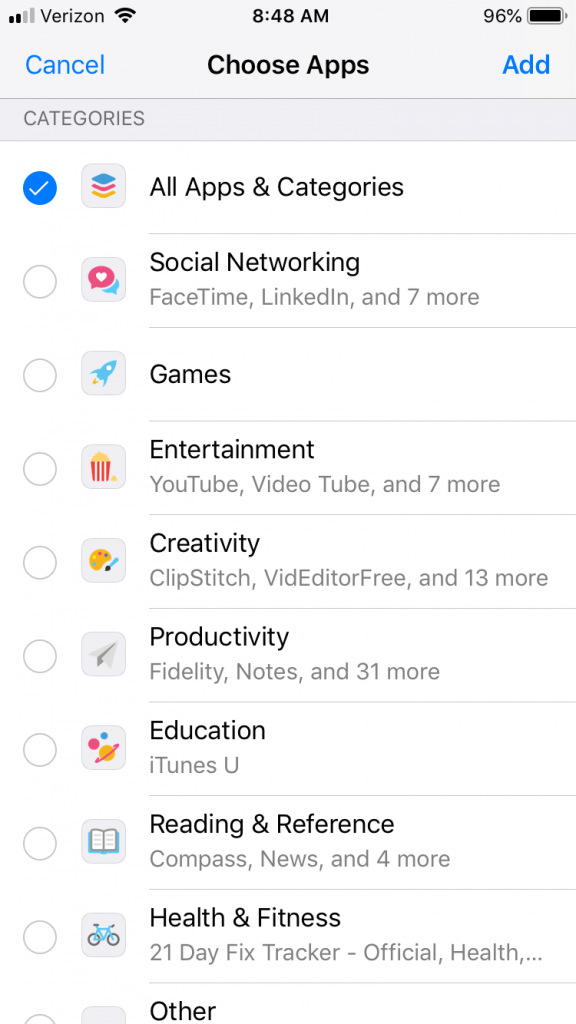 Step 5:  Enjoy your life and a less cluttered brain!

If you’re wondering what happens when you hit your limit . . . if you’re in the app, it will have a pop up that will let you know that you’ve hit the limit and then those apps are shaded out on your phone until the next day.  You can still get into them if you choose to hit the “ignore limit” button, but, that’s like hitting snooze 10 times in the morning.  Don’t even start that bad habit.  We’re better than that <<fist bump>>.